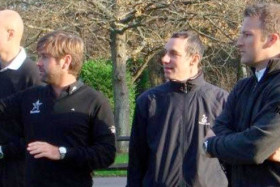 Robert Rock recently took some time out of his busy playing schedule to pop in to Leatherhead Golf Club to see how the course renovations are doing.

Rock and James Edwards of James Edwards Golf Design have been contracted to oversee a 5 year course renovation programme at the club.

Upon seeing the work already nearing completion, Rock said “I’m really pleased with where things are at the moment” he continued “We really wanted the starting holes to stand out a lot more, but without being overly penal on the average club member, and I think that what James and I have put in place achieves that” he added “I am a great fan of the traditional styling of some of the older courses, and having the opportunity to work on a 100 year old Surrey course is really exciting, especially as I am a great fan of Colt and Mackenzie style courses”

Rock has been very busy this year having played in 8 events so far, accumulated winnings of nearly £500,000, a win in Abu Dhabi and currently sits 6th in the Order of Merit.

As well as his interest in golf course design, Rock is committed to his fledgling golf academy business. The Robert Rock Golf Academy in Lichfield is the first of many that he plans to open over the coming years.

The Academy in Lichfield has 3 full time instructors, all teaching Rock’s swing philosophy “I really like to work closely with my instruction team and I am constantly in touch with my 2 lead instructors Danny and Patrick” he added “I’m really excited about our latest addition to the team, Liam, who came over to the Doral with a friend of mine” Rock continued “I got him a range pass at the tournament so that he could help me out a little, it was great to see him spend time discussing the mechanics of the golf swing with the other instructors like Pete Cowan”

Although tournament golf is his priority over the next few years, Rock’s passion is to introduce more children to the game of golf, he explained “At the moment I’m looking for a sponsor to help with our schools programme within the Birmingham area” he added “I am determined to get more youngsters into this great sport which has given me so much over the years”