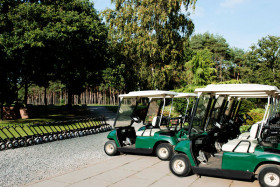 The club’s last 2 holes and the original clubhouse were lost when the M25 was built in 1983, but apart from that the general layout has changed little over the last 50 years. Playgolf World, who took over ownership of the club 12 months ago, decided that they wanted to return the course to its traditional parkland layout, as well as ensure that members and guests get to enjoy playing on modern playing surfaces.

James Edwards of James Edwards Golf Design said “The remit from Playgolf was quite clear and includes bunker renovations and reopening of bunkers that have been closed over the last 80 years or so.” He continued “we are also opening some of the old ditches and ponds to help with drainage, adding several features and tidying up the treeline as well as working on a planting programme”. He added “this is a very exciting project for us as it is the start of a 5 year renovation programme which will see the course return to being one of the top courses in the South.”

When asked about Rock’s involvement, Roger Hyder, Head of Operations for Playgolf said “Robert is an old friend of James’s and is keen to get involved with his company and design work, for when he eventually hangs up his playing boots” he added “his input has been invaluable as we are trying to toughen up the golf course for the longer hitting, and arguably better golfers”.

Speedcut, the contractors, commenced work on the 1st hole in the middle of January. In early April, a new first tee had been constructed, a new cross ditch and pond added and new greenside bunkers built. The 2nd hole has new bunkers and the whole area to the left of the green has been drained. The 4th hole has a new cross ditch in front of the green and alongside and across the fairway. The 5th hole has a new fairway bunker and a cross bunker now replaces the 3 pothole bunkers that were in front of the green.

There has been some tree clearing around the 2nd tee and green, as well as next to the 7th green. This was to allow more air and light through which will help the grass coverage thicken.