Leather Gets a Polish 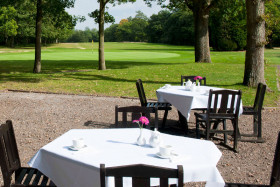 Following its recent acquisition by Playgolf, Leatherhead Golf Club is to benefit from a major investment programme that will see this famous Surrey parkland layout regain its status as one of the most attractive and welcoming venues in the country.

These are exciting times to be a member at Leatherhead Golf Club. While many clubs are cutting back on their outgoings and mothballing major investment programmes, the new owners of Leatherhead are digging deep into their pockets to resurrect the fortunes of one of Surrey’s oldest and most revered venues. Not that the club is on its last legs. Far from it. In fact, on the Monday morning I visited in early January it wasn’t easy to locate a car parking space, while the first tee in front of the clubhouse was a veritable hive of activity, as golfers took full advantage of the mild winter to get their golfing fix.

All the signs are here of a golf club that has a definite spring in its step, especially when you catch sight of the groundstaff at work out on the course and see the plans in the clubhouse entrance revealing how all the course’s holes are going to be renovated over the next three years. Leatherhead was sold last summer to Playgolf, owner of a number of golf clubs throughout the UK, including a 9-hole course in Harrow, an 18-hole course in Bournemouth, and most recently, Lexdon Wood Golf Centre in Essex. Although one of the most established clubs in Surrey may seem like a strange addition to Playgolf’s portfolio, Roger Hyder, the company’s Head of Group Operations, sees it as the ideal venue to put the Playgolf ethos of making the game more accessible into practice. “We thoroughly respect the traditions of the game, and especially the traditions that exist here at Leatherhead,” says Hyder, whose previous management role was at nearby Foxhills Golf & Country Club. “But at the same time, golf needs to open itself up to new people, new generations, and above all, new ideas. Regardless of their age, gender, ability or wealth, golfers shouldn’t feel intimidated to visit a golf club. Our aim is to make golf more welcoming and more affordable, and above all, something that fits into and around your life.”

One of the club’s ideas sees the launch of a new membership scheme that is aimed at those golfers who want all the benefits that membership brings (i.e. handicap, ability to play in competitions, and the joy of being able to call yourself a member), without the significant outlay of a full annual membership, which, at Leatherhead, currently stands at a respectable £1,500. The new Levy Membership will require an upfront cost of £750 per year, which can be put towards any expenditure at the club, including green fees (charged at 50% of the standard fee), buggy hire, food and drink, golf equipment, or even the hire of one of the club’s function rooms.

While several clubs operate green fee credit schemes, this is the first I’ve heard of that offers such a flexible way of spending your money. And while that money must be spent within a 12-month period, any further top ups that are put onto the levy card can be rolled over for the following year. The only limitation on this membership is that golfers are restricted to teeing off after 10am at weekends, unless you happen to be playing in one of the club’s many competitions, when you join the draw as normal. As Hyder explains: “There is a huge section of golfers in their mid-30s and 40s who aren’t members of clubs because they can’t justify the expense of a full membership, yet they still want to play once a month, or however often, and want to feel like they belong to a club, and that they have a golfing home-from-home where they are made welcome. The Levy Membership meets that need.”

It’s a bold move, and one that may well have several full members making the shift down to Levy Membership, but it also looks certain to attract a whole new generation of golfers for whom full membership has proved too inflexible for their needs in the past.

Leatherhead’s star attraction, regardless of whether you’re a member or casual visitor, is undoubtedly its historic parkland layout. First opened in 1903 under the geographically vague title of The Surrey Golf Club, it is actually some distance from the town of Leatherhead, thanks to the M25 motorway, which carved its way between the two venues when it opened in 1982.

The club had to relocate its opening and closing holes to make way for the six lanes of tarmac that now bring golfers to the course with such alarming ease (it’s just a minute’s drive from Junction 9), but little else has changed on the course since the turn of the last century. Thankfully, a swathe of mature woods blocks any view of the motorway, while the noise is barely audible above the tweeting of the birds. In fact, you have to constantly remind yourself that you’re within a well-struck driver of the UK’s busiest highway, such is the peacefulness and serenity of the surroundings.

Leatherhead is soaked to the rafters in golfing history. The inaugural match here saw Open Champions James Braid and Harry Vardon go head-to-head, while Alf Perry, who won the Claret Jug in 1935, served as the club’s head professional for 36 years during the inter-war period. Perry was selected to play in the Ryder Cup team following his Open triumph and brought the entire team – which included Henry Cotton, Reg Whitcombe and Alf Padgham – to play at Leatherhead prior to their departure from Southampton for the boat trip to New York.

At 6,200 yards off the back tees, the par 71 course is not long by modern standards, and that, in addition to its wonderful woodland setting, is part of its charm. Big hitters who manage to keep it straight, negotiate the odd dog-leg, avoid the many bunkers, ditches and trees, and putt like a demon, will clearly be able to score well here, but the rest of us will still take pleasure from bagging our fair share of pars, and the perhaps the odd birdie, when everything slots into place.

In order to reinstate some of the features that were a part of the architect’s original intent, James Edwards Course Design has been brought in to advise on a three-year programme of renovations that will seesix holes completed each year. Course Manager Peter Goodbun and his staff are currently working on the first, second and sixth holes, which will see the fairways re-shaped, and bunkers enlarged, conjoined and generally bought back into play, while the landing areas for big hitters are being narrowed to increase the challenge as you get nearer to the green. The work will retain the character of the course – without adding yardage –and will really serve to freshen up the challenge of what is an extremely entertaining course to play.

As the scorecard reveals, Leatherhead is, quite literally, a game of two halves, with the front nine measuring 3,495 yards, and the back nine ‘just’ 2,727 yards. Of course, not every number tells the full story, with the par being split 37/34, and with handicap golfers just as likely to mess it up with a wedge in their hands as they are a driver, there are no giveaway holes on either stretch. There is a fine variety of holes, with a few really long par fours (4th and 6th), a few driveable par fours, and five short holes, the last of which is the 204-yard 18th, which is a tough one to par with the match all square. Personal favourites include the dog-leg 404-yard third, which requires you to position your drive perfectly off the tee to avoid blocking your shot to the green in front of a tree that guards the elbow.

Although the back nine is considerably shorter, it’s both beguiling and, in my humble opinion, slightly more entertaining than the front. The 284-yard 11th is a superb, potentially driveable par four, while the 12th is a delightful par three played across a valley to a raised and angled green. The 300-yard 14th sees a tree standing like a sentry on duty in the middle of the fairway, requiring a careful drive that leaves a wedge to a two-tier green. The par-five 16th is tough to reach in two, as the green is raised, although this hill makes for a lovely drive from the 17th tee.

The halfway house, which as the name suggests, is by the 10th tee, is something of an icon in Leatherhead’s folklore, and is a pleasure to stop off at for something to warm you up or cool you down depending on the season. The clubhouse is also due for a makeover, with plans currently awaiting approval for an internal redevelopment that will see the upstairs transformed into a stunning new bar and restaurant that will enjoy a grandstand view over the course, while the downstairs dining area will be extended to allow events for up to 250 people to be catered for, rather than the existing 100.

The investment is considerable and well thought out, and shows that the clubs new owners are serious in their intent to make Leatherhead a showcase for the Playgolf Group. In fact two of the directors have bought properties on the exclusive Pachesham Estate that borders the course, giving a clear indication that they are in this for the long haul. It all adds up to an exciting and attractive mix, both on and off the course, which will ensure that future generations of golfers keep flocking to this most welcoming of clubs.

For details of the new Levy Membership, and all other enquiries, please call 01372 849413, visit www.lgc-golf.co.uk or email [email protected]