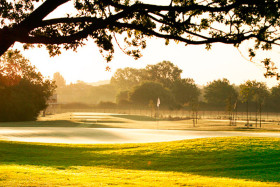 When was the last time you finished a game with the same ball as you started with? By improving your course management skills you can cut a substantial amount of shots from your score.

Playing smart and controlling your emotions are a large part of good golf course management. By not abandoning a game plan and focusing on each shot, you can become a consistent player.

One Shot at a Time:

Many golfers make the error of thinking about upcoming shots and lose their concentration on the shot about to be played, causing a poor result. The mistake then gets compounded when he tries to recover with a shot that is well beyond his ability.

Get The Best From Yourself:

It is important to realise your limitations, understand which clubs you have a good feel for and which you need to work on, and then use this knowledge on the course. Realise that you cannot duplicate the shots that you have seen professionals make on television and don’t let your ego dictate your next move on the course.

Have a Game Plan:

Try to have a tangible target for every shot you take on the course. Rather than hitting the ball towards the green and hoping it lands somewhere that gives you a decent chance at an approach, you need to plan for the hole.

Once you have become acquainted with a course and have a good concept of where it is advantageous to be on each of its holes, pick out targets in the background to aim for. Know where the hazards are, especially the “blind” ones that cannot be seen from the fairway, and have targets chosen that can keep you clear of them. One of the key aspects of golf course management is hitting shots that make your next shot less difficult. Rather than try to hit at a flagstick on a green, it is sometimes advisable to hit to a spot that gives you an uphill putt at the hole or keeps the ball away from a bunker. Having a target in mind during a shot can help you to achieve these goals.

Avoid the common mistake of trying to hit the ball as far as you can every time off of the tee on par fours and fives at the expense of accuracy.

Keep the Ball in Play:

The benefit of having a shorter approach shot to a green is more often than not lost once the ball rolls out of bounds or into a hazard because you have tried to hit the ball as far as physically possible. Novices will typically struggle to hit their driver with any degree of accuracy, and until the club is mastered the lower-numbered woods should be used off the tee to keep the ball in the fairway and give the player a realistic shot at hitting the green.

Now get out there and see if you can finish a game with the same ball as you started with? I’d be interested to know how you get on Author: Paul O’Brien, PGA Golf Professional