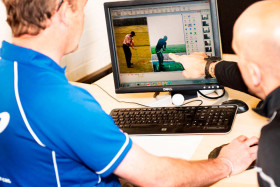 How Great Golfers Think Between Shots

During a normal round of golf, only around 18% of your time is spent actually hitting shots. So what should you be doing for the other 82% of the time?

In the 10 plus years that I have been researching and coaching golfers, I have discovered that during a four hour round of golf, a golfer will switch his or her concentration on and off repeatedly with the ebb and flow of the game. The challenge of turning on and off concentration during shot making makes it more difficult to get into a zone focus.

Peak performing golfers have mastered the art of knowing when and how to focus to develop total concentration to maximize their performance. Total concentration occurs when an athlete becomes totally involved in the task, feels that time is suspended, and loses the sense of being separate from his/her surroundings.

I often get this question about focus on the golf course: What do the best players think of between shots? Do they start planning the next shot or do they relax between shots?

Legendary golfer Ben Hogan was known for his powers of concentration and focus during a round of golf. He went into his bubble and did not surface until after the round. Some golfers believed that the best way to focus during a round was to stay dialled in continuously, never letting your guard down.

However, my take on how to focus during a round of golf is that most golfers cannot concentrate for four hours straight it is almost an impossible chore. In addition, you are only required to focus for the 30 -40 seconds during your pre-shot routine before you pull the trigger.

My recommendation is to save your energy for the end of the round. You do not have to grind between shots by thinking intensely about your next shot (or analyze your last errant shot). Instead, the goal should be to relax your focus between shots kick it in for 30 seconds when it’ your turn to play and reserve your mental energy for the end of the round.

In addition, you should not practice between shots. If you hit a bad shot, don’t carry this shot with you for two holes and try to analyze what went wrong. Save the practice for after the round. The time to work on your swing is after the round, not during the round. This results in playing the golf swing instead of playing the golf shots on the course. Do not waste your focus between shots trying to fix what may not be broken. In most cases it is impossible to fix a swing fault in nine holes.

What should you do between shots? I suggest anything but your next or last shot! The goal is to have fun between shots and relax your focus. Each person can achieve this differently. For examples, some golfers like to carry on with conversations with playing partners between shots, where other golfers prefer to enjoy their surroundings and get into nature.

What should you focus on between shots to relax your focus and not worry about the next shot? Talk to your playing partners, look at the birds, sing a tune in your head, tell a joke to a friend, or anything to have fun and relax before you get to your next shot. Once you get up to your ball, it’s important to dial in your focus and let go of what you were thinking about between shots.

Some golfers use a symbolic physical trigger to help them get refocused for the next shot. Some golfers use their pre-shot routine to trigger the start of the routine and when to focus. For example, the moment you pull a club out of the bag is the time to focus on the current shot and let go of the past.

The next time you play a round of golf, I suggest you save your focus by relaxing between shots. Do not think about the next shot until you get to the ball and it’s your turn to hit. Occupy your mind between shots with other enjoyable activities.