Do Superstitions in sports help you win? 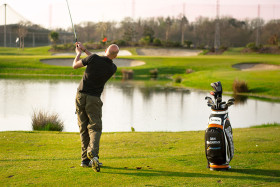 Charles Howell approached the 18th tee, on the 72nd hole of the 2005 Buick Invitational needing an eagle 3 to get into a playoff with Tiger Woods. From about 100 yards away, Charles struck his 3rd shot perfectly, the ball soared through the sky and landed in the cup only to bounce backwards and spin into the nearby water.

Golf is a funny game, it has been said that golf is 30% mental, 60% skill and 10% luck. Many PGA players are very superstitious, whether it’s a common story as Tiger wearing a red shirt on Sunday, or lesser known stories like Doug Sanders refusing to use white golf tees nearly every player has their hitch.

Superstitions in golf are mainly based on the notion that if you repeat a certain behaviour, you will have good luck. As irrational as some superstitions seem, they give golfers a sense of feeling lucky, but is there more to superstitions other than just feeling lucky? For example, some golfers and coaches would say that superstitions give confidence and belief. Yet you could argue that most superstitions are just wacky habits that have no scientific research to back up the claim they actually work.

The preparatory behaviours in routines are excellent methods to help you focus on one shot at a time and are extremely useful tools to refocus attention when distracted. The pre-performance routine is a merging of mental and physical steps that blend into one long behaviour. The pre-shot routine combines physical actions (such as a practice swing) and specific thoughts or images (visualizing the shot, focusing on the target, and mental cues to trigger the start of your performance such as the image of the target in your mind). All high-level golfers use very systematic pre-shot routines to help them prepare for the task ahead.

Superstitions, unlike routines, are not based on fact or reason. If an athlete attributes his success to some consistent superstitious ritual, such as wearing a red shirt on Sunday or eating a certain food prior to each game, the athlete will think it works and keep repeating the behaviour, until he thinks otherwise and discards it. The person believes the ritual brings success and that has an effect on his confidence level. Arnold Palmer’s wife kisses each one of his golf balls before he uses them in a game. Paul Azinger always marks his golf ball with a US penny, which features the head of Abraham Lincoln. He also makes certain to turn the penny so Lincoln is looking at the hole. These are all superstitions and not routines.

Superstitions are not necessarily bad. In fact, they can build confidence and help boost morale. There is a saying in sports, “if it works, use it.™ If you use a superstition before competition, have faith in it, and it works, great use it. Anything that increases your faith or belief in performance is a bonus. A recent German study featured in Golf Digest did a little test of luck. A group of players were given proclaimed lucky golf balls, while another group was given â€œthe same golf ball that everyone used. The group with the lucky golf balls drained 30% more putts than the group that did not. I would give you one caution here: Do not use superstitions as the only reason for your success and think that they will help you be successful no matter how well you prepare before game time.

My recommendation would be to develop solid technical skills for golf and combine that with sound mental preparation skills to apply before competition such as a warm up routine, mental imagery, and setting game plans or strategies to perform to your best. Combine this with wearing that lucky shirt or some other superstition and that belief in yourself tied with sound preparation can only be good for your golf game.

Natalie Gulbis has an odd high-calorie McDonalds infused ritual before every round. Her treat is an Egg McMuffin and hash browns

Duffy Waldorf has his kids write on his golf balls.

Karrie Webb always used consecutive balls from Thursday to Sunday, starting with 4â€™s and ending with 1â€™s to finish her round on Sunday. Why? â€œOf course, I like to be number one on Sundays, she said.

Peter Lonard the Aussie player, much like Tiger, enjoyed the colour red on Sundays, but he chose his underpants as his clothing of choice.